Mappy Hour: Independent from Spain? One Catalonian Town Already Is (Geographically, at Least)

Posted on October 27, 2017 by WolfeStreetTravel

In the meantime, as the New York Times reported today, the Catalonian town of Llivia has been independent from Spain for 350 years. Geographically, the town is located entirely within France: 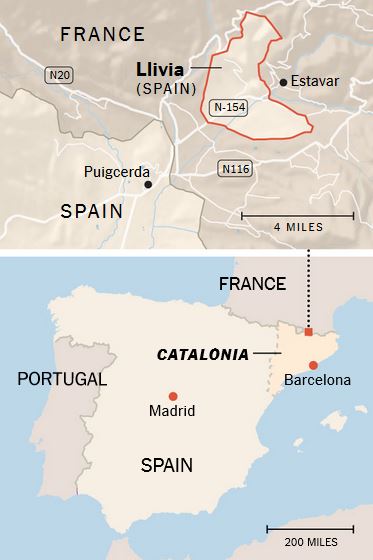 The NYT reports that, with regard to independence, “for Llivia, a quaint town tucked about 4,000 feet up in the foothills of the Pyrenees, an important part of that decision was made centuries ago. Llivia is already separated from Spain physically: The five-square-mile municipality is a geographic anomaly resulting from a quirk of the 1659 Treaty of the Pyrenees, which settled a more-than-two-decade round of fighting between Spain and France.

Only “villages,” according to the treaty, were to be ceded to the French crown. Llivia was considered a town, not a village, and so remained part of Spain, and the region of Catalonia.”

Catalonia est non Espana! And, if Catalonia does indeed secede, Llivia won’t be Catalonia (on a map, anyway).

4 thoughts on “Mappy Hour: Independent from Spain? One Catalonian Town Already Is (Geographically, at Least)”