Posted on June 20, 2020 by WolfeStreetTravel

That’s right – Vanilla Ice knew his Old Town ice houses. There are exactly two ice ice houses in Alexandria, down from dozens across the city at the turn of the 20th century.

Neither are used for storing and selling ice anymore, but this summer, according to Alexandria Living Magazine, a company called Goodie’s Frozen Custard will be moving into the more iconic of Old Town’s two extant ice houses. After 30 years as a plumbing supply shop, and then being abandoned for more than a decade, that ice house will soon host a tenant worthy of the space.

Between 1900 and 1930, ice houses in Alexandria distributed hundreds of thousands of tons of ice annually to the city’s businesses and residents. The increased availability of electricity throughout the city after this period rendered the ice houses obsolete. Most were demo’d to allow the construction of new structures. But two remain standing, albeit used for other purposes.

The more well-known of the two (and the one for which its function is unambiguously broadcast), is located in the southwest quadrant, on the 200 block of Commerce Street (and visible from King): 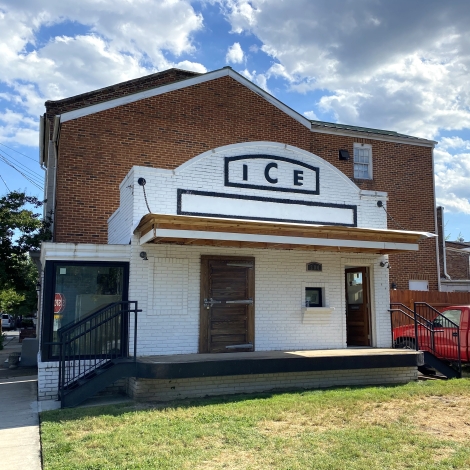 When one of us was growing up, that ice house was abandoned, and painted a uniform, faded light blue. The “ICE” was visible only as relief on the facade. (BTW, we continue to look for a serigraph of the ice house in this condition by late, local Torpedo Factory artist Clay Huffman, but the search has been fruitless.) About 5 years ago, someone bought ICE house, began restoring it, and applied the new, improved paint scheme. This is the future home of the frozen custard purveyor, fittingly enough.

The other remaining ice house structure lies on the 100 block of South Lee Street:

We run or walk by this place multiple times a week, and only recently realized that it was an ice house. This was the home of the Mutual Ice Company from 1900 to 1937, when it closed due to widespread adoption of electricity for refrigerators and freezers. It’s now home to an architectural firm.

As with the first “ICE” house, the structure on Lee features a shelf on which to place ice blocks during a transaction:

And a pretty impressive, heavy wood insulated door to the ice freezer: 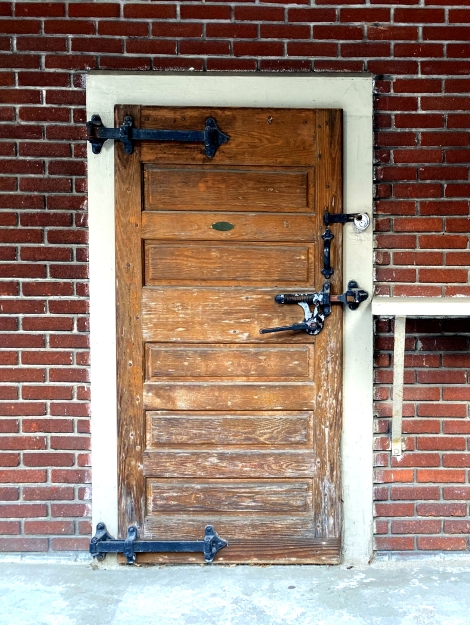 These more recent ice houses have nothing on the grand daddy of them all in Old Town, though – the 18th-century Gatsby’s Tavern ice well. (All of the quoted information below is verbatim from the city’s historical information site here.)

“The Alexandria Common Council granted Wise permission to build an icehouse underneath the corner of Royal and Cameron Streets in 1793 as part of his construction. For the previous four years, Wise had leased the Alexandria Inn and Coffee House at 201 N. Fairfax Street, which included an on-site icehouse. Perhaps this convenience in his earlier ventures convinced Wise of the importance to the hospitality industry of having a regular supply of ice. Wise saw into the future by including this important feature in his designs for Alexandria’s five-star hotel of the 18th century.”

Inscription on the bluestone at the center of the circle on the corner above:

“Ice harvesting was an expensive and time-consuming process. It was cut from the frozen Potomac River in the winter and hauled by cart to the City Tavern for storage.  Once in the well, the ice was formed into a solid mound and covered with straw to preserve it for use through the summer months.  Preserving ice was an on-going challenge in the late 18th century and an expensive venture. Therefore, ice was generally reserved for wealthy estate owners. George Washington records in his journals the trials and tribulations of trying to preserve ice. In Alexandria, many homes had interior ice pits to store small quantities of ice. Those lucky enough to have access to ice used it to chill beverages, preserve perishable foods, and even make a new popular dessert of the day: ice cream. This availability of ice at Gadsby’s Tavern helped to distinguish the establishment as one of the finest of its kind in the 18th century.” 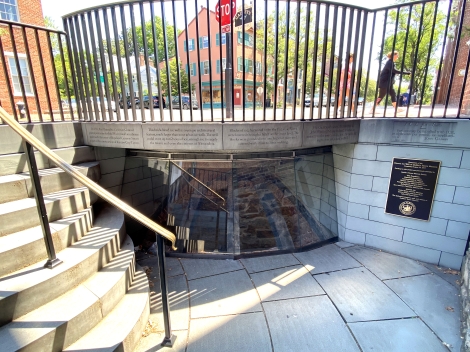 Linked directly to the Tavern basement by a brick-walled and vaulted tunnel, the ice well was also accessed by the tavern staff through a small hatch at street level. The City Tavern’s well is much larger than most urban residential ice wells, measuring over 17 feet in diameter and over 11 feet deep at the lowest excavation point. The well could store as much as 68 tons of ice, enough to supply the tavern and even the citizens of Alexandria. In 1805, when John Gadsby was leasing the tavern from John Wise, Gadsby advertised the sale of ice from the well, “ICE FOR SALE, Persons may be supplied with ice, at eight cents per pound on application to John Gadsby.”

A view into the ice well: 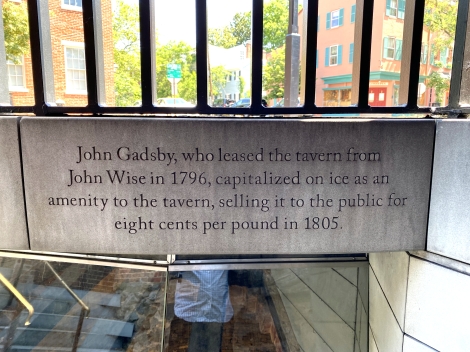 “The ice well is an important and rare example of a commercial well in an urban environment.  Most ice wells have been lost to “progress” as they have succumbed to office buildings, parking lots, and housing.  Examples still exist at Monticello, Montpelier, and Mount Vernon, but these were created for private and not commercial use.  Gadsby’s ice well tells the larger story of commerce and the evolution of hospitality.  It is a reminder to modern day travelers and residents of something we take for granted today – a ready supply of ice.”