As noted in our trip preview post, we planned our road trip segments between the more distant microstates to include a stopover location halfway between the two. targeted, tiny territories. The location pretty much exactly halfway between the Principality of Monaco and the Principality of Andorra (our final microstate destination) was the French town of Beziers. And Beziers seemed like a great place to visit, inasmuch as it was the location of a horrific massacre of the Cathars during Pope Innocent II’s Abigensian Crusade in the 13th century. . .

However, we (one of us, anyway) has had the medieval walled city of Carcassonne on our list to visit for years, so we selected this as our stop over. Both cities – and the entire Laguedoc region – were engulfed by the aforementioned crusade, which is equally of interest to (one of) us, so we’d still check that box, even if it added a little distance to this leg of the trip:

Totally worth it – check this out!

We don’t usually include photos that we didn’t take, but this one was too awesome not to: 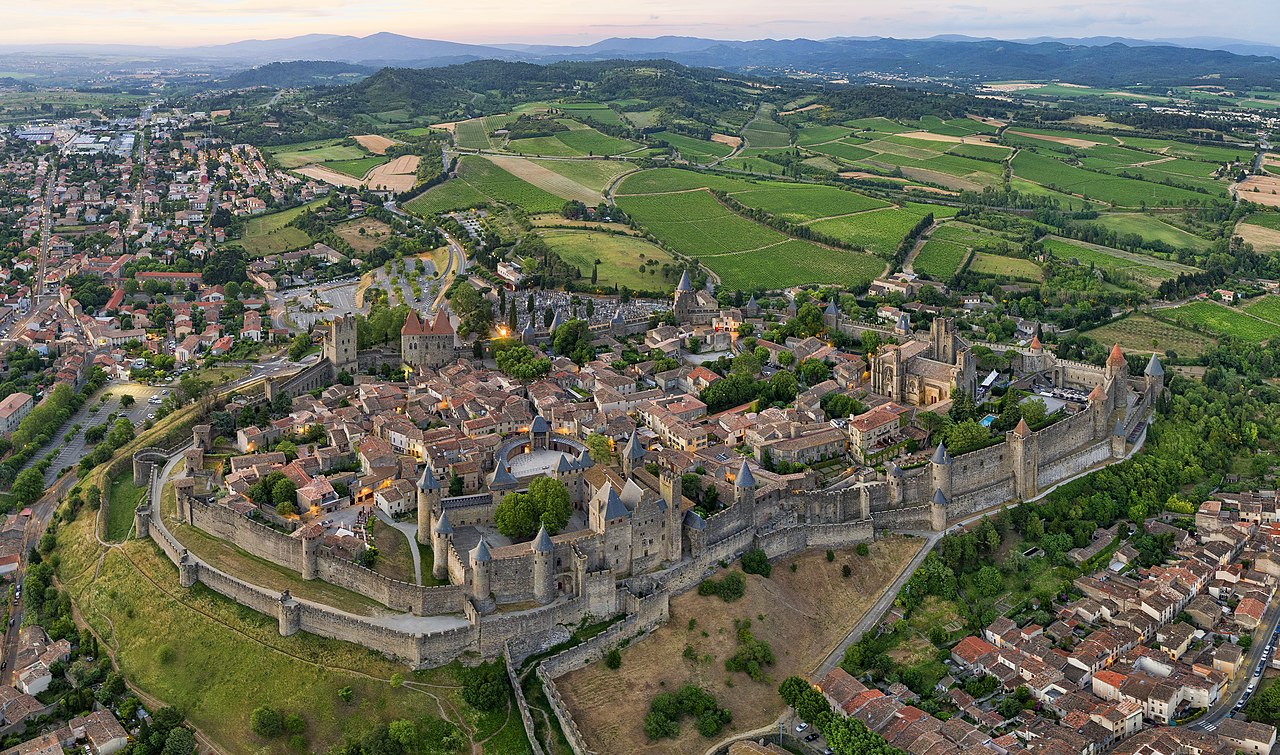 Continuing this theme of unoriginality and for expediency’s sake – here’s a couple of quick items on Carcassonne from Wikipedia:

“Inhabited since the Neolithic period, Carcassonne is located in the Aude plain between historic trade routes, linking the Atlantic to the Mediterranean sea and the Massif Central to the Pyrénées. Its strategic importance was quickly recognized by the Romans, who occupied its hilltop until the demise of the Western Roman Empire. In the fifth century, it was taken over by the Visigoths, who founded the city. Its strategic location led successive rulers to expand its fortifications until the Treaty of the Pyrenees in 1659.

Carcassonne is the largest walled city in Europe (among those that have their defensive wall still intact). Its citadel known as the Cité de Carcassonne, is a medieval fortress dating back to the Gallo-Roman period, and was restored by the theorist and architect Eugène Viollet-le-Duc in 1853.”

“Carcassonne became famous for its role in the Albigensian Crusades, when the city was a stronghold of Occitan Cathars. In August 1209 the crusading army of the Papal Legate, Abbot Arnaud Amalric, forced its citizens to surrender. Viscount Raymond-Roger de Trencavel was imprisoned whilst negotiating his city’s surrender and died in mysterious circumstances three months later in his own dungeon. The people of Carcassonne were allowed to leave – in effect, expelled from their city with nothing more than the shirt on their backs. Simon De Montfort was appointed the new viscount. He added to the fortifications.

In 1240, Trencavel’s son tried to reconquer his old domain, but in vain. The city submitted to the rule of the kingdom of France in 1247. Carcassonne became a border fortress between France and the Crown of Aragon under the Treaty of Corbeil (1258). King Louis IX founded the new part of the town across the river. He and his successor Philip III built the outer ramparts. Contemporary opinion still considered the fortress impregnable. During the Hundred Years’ War, Edward the Black Prince failed to take the city in 1355, although his troops destroyed the Lower Town.”

Scenes from the town’s exterior curtain walls and entry:

More from Wikipedia: “The fortified city itself consists essentially of a concentric design of two outer walls with 53 towers and barbicans to prevent attack by siege engines. The castle itself possesses its own drawbridge and ditch leading to a central keep. The walls consist of towers built over quite a long period. One section is Roman and is notably different from the medieval walls, with the tell-tale red brick layers and the shallow pitch terracotta tile roofs. One of these towers housed the Catholic Inquisition in the 13th century and is still known as “The Inquisition Tower.”

Carcassonne was demilitarised under Napoleon and the Restoration, and the fortified cité of Carcassonne fell into such disrepair that the French government decided that it should be demolished. A decree to that effect that was made official in 1849 caused an uproar. The antiquary and mayor of Carcassonne, Jean-Pierre Cros-Mayrevieille, and the writer Prosper Mérimée, the first inspector of ancient monuments, led a campaign to preserve the fortress as a historical monument. Later in the year the architect Eugène Viollet-le-Duc, already at work restoring the Basilica of Saint-Nazaire, was commissioned to renovate the place.

In 1853, work began with the west and southwest walls, followed by the towers of the porte Narbonnaise and the principal entrance to the cité. The fortifications were consolidated here and there, but the chief attention was paid to restoring the roofing of the towers and the ramparts, where Viollet-le-Duc ordered the destruction of structures that had encroached against the walls, some of them of considerable age. Viollet-le-Duc left copious notes and drawings on his death in 1879, when his pupil Paul Boeswillwald and, later, the architect Nodet continued the rehabilitation of Carcassonne.

The restoration was strongly criticized during Viollet-le-Duc’s lifetime. Fresh from work in the north of France, he made the error of using slates and restoring the roofs as point-free environment. Yet, overall, Viollet-le-Duc’s achievement at Carcassonne is agreed to be a work of genius, though not of the strictest authenticity.””

Outside Carcassonne’s citadel, the Chateau Comtal:

One particularly interesting element of the citadel is its barbican:

The Chateau Comtal’s barbican served not only to protect the entrance to the citadel, but provided a sally point for forays of the defenders to attack outside the citadel. This enabled the defenders to assemble and exit en masse, rather than string out the exit, as would occur if the barbican area consisted only of fortified towers flanking a gate (as was the case with the barbican at the city’s curtain wall shown above).

Note the open back of the barbican gate tower – this was intentional, allowing defenders from the citadel proper to fire arrows at any attackers who overran the barbican.

Once through the barbican, the attackers would have to traverse a narrow causeway to attack the citadel proper, while being attacked from both the traditional flanking towers of the barbican at the gate of the Chateau Comtal, from the citadel’s crenelated walls, and from the sides of the citadel’s corner towers:

Other views of the Carcassonne’s Chateau Comtal:

Around town, including l’Escargot restaurant, where we experienced the worst snails we’ve consumed to date in France (they weren’t horrible – they just didn’t live up to the restaurant’s name and were not nearly as perfect as those consumed in a jetlagged state in Amboise, at the outset of our bike trip through the Loire Valley . . .):

We stayed in the walled city, similar in location to our digs in Diocletian’s Palace in Dubrovnik:

Really nice property, but the highlight had to be the pool in the shadow of the city’s cathedral, where we spent some quality time in the late afternoon: