Posted on June 6, 2020 by WolfeStreetTravel

A Saturday morning quiz: spot the difference between these two pictures 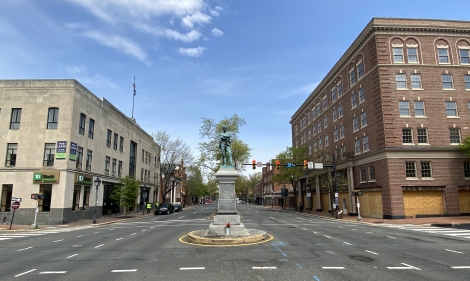 We took the picture on the top a few weeks ago; we took the one on the bottom this past Tuesday.

In light of the ongoing protests throughout the country, the city worked with the United Daughters of the Confederacy on Tuesday morning to remove the Appomattox statue from its plinth at the intersection of Washington and Prince Streets. The city had voted several years ago to remove the statue, but were prevented from acting on this by a state law that reserved decisions on Confederate war memorials at the state level. The new legislature that was voted into Richmond during last year’s mid-term elections reversed this policy, enabling municipalities to take the actions they saw fit. In the case of Appomattox, this required working with the monument’s owner, since the statue and plinth are not owned by the city. (The circular patch in the intersection also may be owned by the UDC – we’ve heard this, but haven’t been able to verify it. The city’s GIS parcel viewer does show a little circle at this intersection, while there is none in the other intersections, but there’s not a parcel designation for the circle.)

We previously posted on Alexandria’s Appomattox monument in 2017 after the white supremacist jackassery in Charlottesville.

From this article in the Alexandria Gazette: “Although City Council voted unanimously in 2016 to move the statue to another location, prevailing law at the time required approval from the General Assembly for the relocation of the Appomattox Statue along with other war memorials throughout the state. A bill passed by the legislature and signed by Gov. Ralph Northam (D) earlier this year removed those protections, giving authority over memorials to local jurisdictions. That law goes into effect July 1. ‘We had already coordinated with the UDC and scheduled a date for removal in July,” [Alexandria City Mayor] Wilson said. “They approached the city last night with a request to remove the statue early. That is probably a testament to the moment we are in right now.'”

There was earlier consideration to move Appomattox to the city’s Lyceum museum located on the southwest corner. That no longer appears to be the case and it’s unclear where the statue (and plinth, we assume) will be relocated.

A plaque addressing Appomattox near the Lyceum: