Microstates! The Most Serene Republic of San Marino

The Most Serene Republic of San Marino is the lone relic of what once were scores of city states across Europe in the middle ages. Founded in 301 AD, the country has survived intact for more than 1700 years, withstanding threats by other Italian city states, the Napoleonic Wars, the unification of Italy, and two world wars. It is the oldest republic in the world.

The country is surrounded by Italy and located immediately inland from the Adriatic. Most of the microstate is perched atop the three peaks of a formidable mountain – Monte Titano: 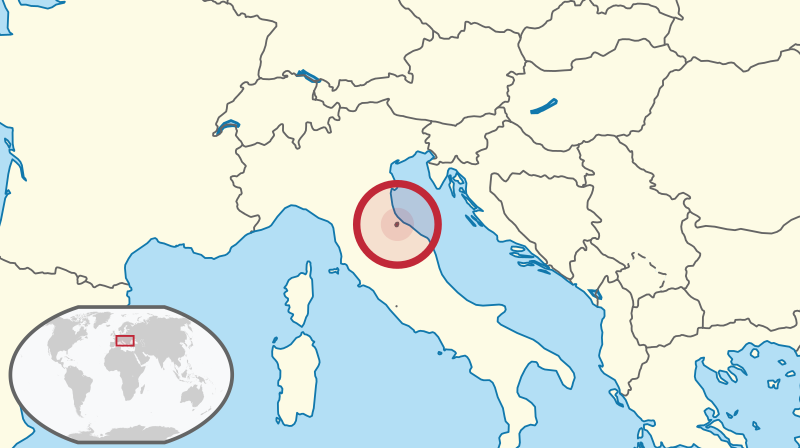 We traveled on Day 2 from Vatican City (or nearby in Rome, anyway) to San Marino. This was the only time during the trip that we would drive directly from one microstate to another without an intermediate stop. Connections during the rest of the trip will require a layover in an Italian, Swiss, or French town (each of were great destinations in their own rights). Our drive out of Rome took us north and east, initially on highways, but for the last enjoyable half hour or so on crazy switchback roads through the Italian countryside to reach San Marino:

Review of the Republic

History: The country is named after Marinus, a stonemason from a Roman province across the Adriatic in what’s now Croatia. According to legend, Marinus traveled in AD 257 to Rimini, a city on the Italian coast, immediately to the east of modern day San Marino, to support rebuilding the city’s walls. Marinus later was ordained as a deacon by the Bishop of Rimini, then fled inland to seek refuge on Monte Titano to escape the third-century Diocletianic Persecution of Christians. He subsequently founded an independent monastic community in AD 301, a date that is recognized as the official year of San Marino’s founding.

By the 12th century, San Marino had developed into a commune ruled by its own statutes and consuls. The country’s isolation atop Mount Titano and its mountain fortresses enabled San Marino to retain its independence despite attacks by the Duke of Rimini and other powerful families and bishops. Although the country originally consisted only of Monte Titano, it grew to include some adjoining towns and castles in 1463, when Pope Pius II granted these in return for its support for a successful alliance against the Duke of Rimini. The country has remained this size ever since, declining an offer of increased territory by Napoleon in the late 18th century. (San Marino’s Regent stated the “Only in poverty and insignificance could San Marino hope to maintain herself free and sovereign through the centuries.”)

Why it still exists: Two reasons: Napoleon and Garibaldi.

Relative size: San Marino is the third smallest (or third largest – take your pick) of the five European microstates and is slightly larger than the City of Alexandria, at 15 square miles.

Government: San Marino is the world’s oldest extant sovereign state and is a parliamentary representative democratic republic. The first written mention of San Marino as a republic is in the 9th century. The Captains Regent, an elected pair, serve as San Marino’s heads of state. Both are elected every six months by the Grand and General Council of San Marino. San Marino also sports the earliest written governing documents of any nation – the Constitution of San Marino (Leges Statutae Republicae Sancti Marini), written in Latin in the late 16th century, the constitution dictates the country’s political system.

A view of Mount Titano as we near San Marino.

Sign in town demonstrating the mountainous nature of San Marino via its twisting, switchback roads (the country’s three fortifications appear here, as well):

Hiking up to the Cesta tower (the middle of the three), with a view from Mount Titano to the Adriatic:

Guaita Tower from one of the rooms in the Cesta Tower, which was built in the 13th century atop the remains of a Roman fort:

Iconic image of Guaita Tower directly above the town of San Marino on Mount Titano: 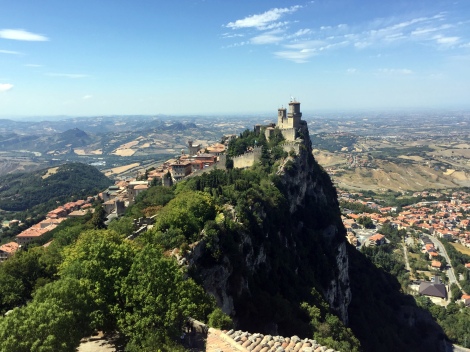 Heading up to Guaita Tower:

Guiata Tower was originally constructed in the 11th century, then reinforced in the 15th century as protection against the House of Malatesta that ruled Rimini and had designs on San Marino:

San Marino’s public square with their Statue of Liberty:

The founding father himself, perched on the right corner of the city hall: 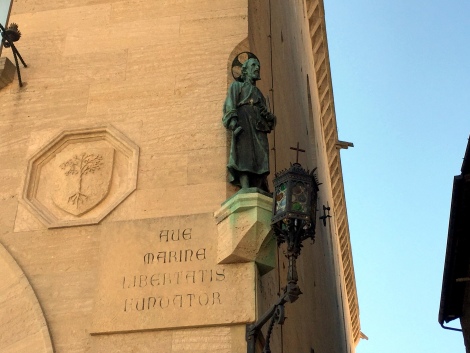 Inside the Palazzo Pubblico, featuring multiple instances of the country’s coat of arms, which feature the three towers (each topped with an ostrich plume – we still have no idea why): 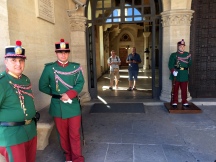 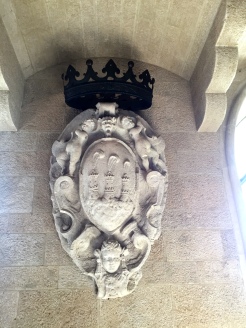 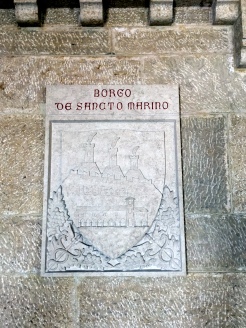 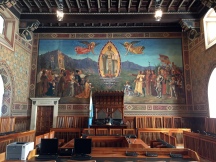 The country was holding a medieval festival while we were there, so there was a lot of this going on: 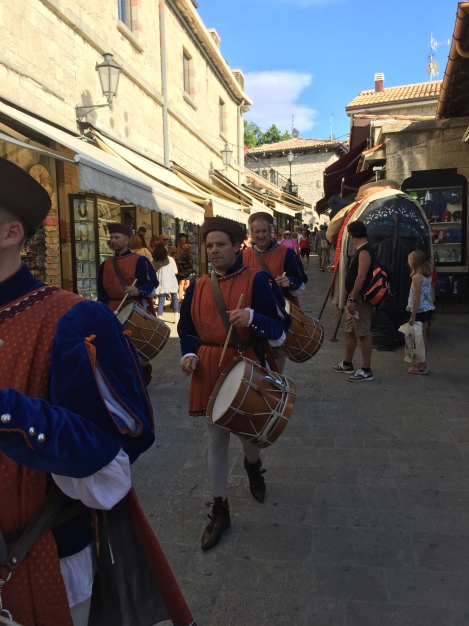 The kid’s definitely diggin’ it: 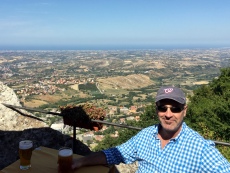 and from our craptastic hotel (albeit with a sweet balcony overlooking the countryside): 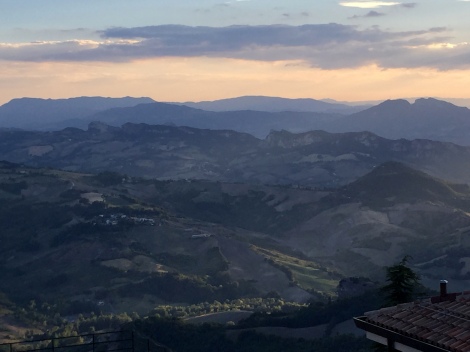 View of the Cesta Tower from the same location:

View into town from our balcony (three ways): 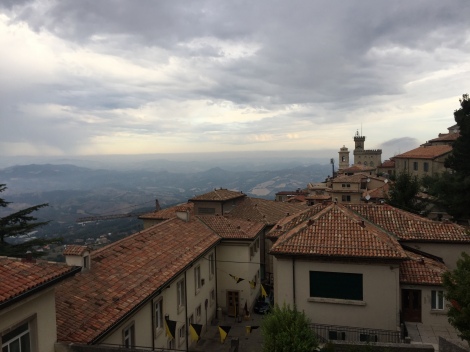 San Marino’s public square at night – quite the crowd!

And some outdoor concert action: 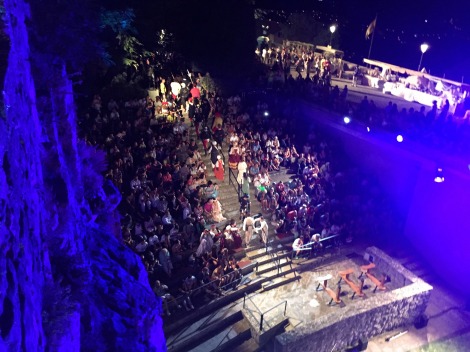 Two down, three to go!